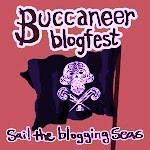 Today’s Buccaneer Blogfest mission, if I choose to accept it (and I do), is a bit of merriment known as the character interview.

People who’ve been around the blog a few times know that conversations with characters are right up my alley; I’ve even let a few of them guest blog for me. (Thanks again, Bruno, Allyn, and Lute.) And once I’d done that… well, I kind of sealed my fate.

Y’see, I’ve got this character. Goes by the name of Will Scarlet. Perhaps you’ve seen him on the “Ballad” page. Harder not to have seen him, if you follow the page. He’s a talker, an attention hog, and has been begging me to let him have his own blog for months. That’s not happening. I don’t have the time. But since I’ll be sitting down for a chat with a character today, it may as well be him. (I’d not soon hear the end of it, otherwise.)

Better cut this introduction short, since I know his answers won’t be. Scarlet, come on down!

Will: Yes! Right! Awesome! Hello, everyone, you all look beautiful – I mean that!

Will: Maybe I meant “beautiful on the inside”. It’s not all about looks, Danielle, no matter how hot mine are. So! What questions have you got for me?

Me: Why don’t you start off by telling us a little bit – A LITTLE BIT, Will – about who you are?

Will: I’m an outlaw undercover at a Renaissance Faire that’s actually Avalon. (Y’know, Arthurian legend? That Avalon.) Anyway, back to me, I’m one of Robin Hood’s Merry Men. Yes, THE Robin Hood. I’m his cousin, as well as his left-hand man, you might say, since Little John snagged the title of right-hand man, and I’m left-handed anyway, so that all works out. I’m also the brains of the group.

Me: Really, Will? You’re actually claiming that?

Will: Well, I mean, not that the others aren’t smart, too. Robin with his leadership savvy, and Marion all on top of interpersonal relations, and Allyn the musical genius, and Little John… well, he’s just big, isn’t he? Intelligent enough, but mostly huge. And quiet. It’s creepy. And okay, so I don’t always act like the brains of the band – or even necessarily like I’ve got a brain in my head. But I totally do! I’d like to see any of the others think up half the stuff I do! Who do they turn to when they need a plan fast? You’re looking at him. Particularly if it’s to do with the Outsiders—

Me: Hold right there. Tell us about the Outsiders.

Will: What? Oh. You know. You people. The modern folks who live outside of Avalon. The awesome ones with computers. Sure, Merlin’s got a computer, too, but what good does that do me? He never lets me use it. I need an iPhone.

Me: Okay, we’re quickly losing the thread of it. Let’s back it up. Now, my dictionary defines “scarlet” as “a strong to vivid red or reddish orange” or “flagrantly immoral or unchaste”. Any of this come into play when you chose your outlaw name?

Will: The red bit, mostly. I love red; so bright and expensive. And my hair’s got some scarlet blended in with the gold, so that’s all very apt. As for flagrant immorality and unchastity—

Will: Coining it. —Well, it’s a bit of a “yes and no”, there. I can be a gentleman, when absolutely necessarily. When it’s not, then God save you. All in good fun, though, you understand.

Me: Yeah, that’d be a “yes and no”, too. Next question: What do you like best about being in the Merry Men?

Will: Um, being awesome? Come on, look at this gig: I got to be a thief led and sanctioned by the most honorable man I know; I get to be practically immortal (did you know that, readers? By virtue of dying a heroic death back in the Middle Ages, and with a little help from Avalonian magic, I get to be eternally young forever! #Winning!); I get to play myself in a Renaissance Faire; I look really good; I—

Me: What does looking good have to do with being a Merry Man?

Will: I don’t know, maybe not much. But muscles developed in fighting for our lives have to help, right? And the glow of fame?

Me: Sure, Will. Last question: Why do you think people should read “The Ballad of Allyn-a-Dale”, once it’s published? …Besides the fact that you’re in it.

Will: Ha-ha! Preempted! Well, how about this: Action! Adventure! Mystery! Suspense! Magic and music, witty dialogue, and an all-star cast (naming no names in particular, apparently). I had a rousing time living it, so they’re bound to love reading it. Plus Allyn’s in it. I can mention Allyn, right? He’s not me, and he’s awesome.

Me: Yes, mentioning Allyn is fine. Thanks for your time, Will. It’s been… breathless.

Will: Yes, I do tend to have that effect on women. Pleasure mine, Danielle. Great to be here. An honor just to be nominated.

Once everyone out there finds a space to slip a word in edgewise, if you have any additional questions or comments for Will, toss ‘em below. He’ll be only too happy to respond.