Today I’m spotlighting author Megan S. Johnston, who has in turn posted a review of my book on her blog! For Megan’s thoughts on my novella “The Swan Prince (Book One of The Wilderhark Tales)”, hop on over to her blog. But first (or second, whichever you’d rather; I’m easy), read on below for a description of Megan’s paranormal romance, TRANSITION. 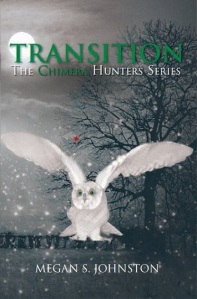 The Chimera a race so old, the humans relegated them as a myth. The Gods feared the Chimeras’ powers; they believed they were a deadly race, with physical abilities beyond belief. So, they split their race in half condemning them to wander the earth, searching for their other half to be complete. Without their sodalis, each was destined to live life without dreams, without love, without hope. The future rested on finding their one true mate for life.

SHELBY O’NEIL has led a solitary life with her parents. So when she goes to school at Washington State University, she believes her life has just begun. Now in her second year, the dreams begin. She dreams with the same man, night after night for months. When her dream world becomes her reality, and her life becomes a danger zone, she quickly learns to trust the one man who has thrown her into this new and dangerous world.

DEVELON COLE is Chimera and his race has been on earth as long as humans. His people are desperate to find their one true mate for life, and Develon has just found his, in the small college town of Pullman Washington. His goal is to protect her against the hunter’s and guide her into who she was always destined to be, his sodalis, his mate. 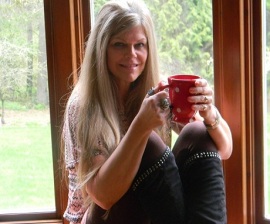 Megan S. Johnston is a freelance writer and entrepreneur living in the Pacific Northwest. In addition to writing fiction, she runs several family-owned and operated businesses, which she started over twenty years ago. She is an avid reader of paranormal romance and a member of the Pacific Northwest Writers Association. She has four children and seven grandchildren and lives with her husband and two dogs in Woodinville, Washington. Transition is her début novel.

Thanks, Megan! Leave a comment here and/or at my guest spot on Megan’s blog for entry into my Blogger Book Fair Raffle! One lucky-duck winner will receive a free paperback copy of my fairytale novella “The Swan Prince (Book One of The Wilderhark Tales)”, a set of “Swan Prince” bookmarks, AND the bookmark set for the upcoming Book Two of The Wilderhark Tales, “The Stone Kingdom”! Last day to enter: Thursday, July 25th. Winner announced: Friday, July 26th!

AND, ALSO, ADDITIONALLY, PLUS: Sheri of the Shut Up & Read blog is hosting the Blogger Book Fair Reader’s Choice Awards, in which “The Swan Prince” is entered in the Fantasy/Young Adult category! To win in my category, I NEED YOUR VOTES! Winning would mean an invaluable promotional opportunity for my book, so please, I ask you – all and individually – on my knees, with whipped cream and cherries or whatever tasty thing makes you happy: Go here and cast your vote for “The Swan Prince”. (You’ll find it in the “Fantasy-Young Adult (3)” drop-down box.)

Let me know you did so, and I’ll throw in another 5 raffle entries for you. And if your votes end up carrying me to victory … I’m doubling my BBF raffle prize! Two names drawn, two paperbacks, two sets of “Swan Prince” and “Stone Kingdom” bookmarks! (And yes, the rules totally allow shameless campaigning for support, so I will not be above begging for the entirety of BBF week, nor will I cry foul if any of you wish to campaign on my behalf. On the contrary, I may go teary-eyed with appreciation.)