Five months until the release of my debut novel through J. Taylor Publishing, “Inspired”!

Yeah, I know, it’s kind of a while to wait. So hey, to help pass the time, how about we have a little giveaway up in here? ^^

The “One More Day” e-ARC contest is closed. Congratulations to winner Eric Wilder! Continue reading for details on the ongoing “Inspired” Journal Contest!

In the novel “Inspired”, one of the traits that characterizes teen protagonist Annabelle is her journaling habit – she buys them by the armload, fills them from cover to cover with story ideas, even names them. I was the same way, at her age (minus the naming part, which is strange, since I used to name almost everything else), and that phase of my life has left me with several fine, empty notebooks still awaiting someone to put pen or pencil to their pages. I’ll never get around to it, which is why I’m passing the privilege on to seven – yes, I said and meant seven – lucky winners. Take a look at the prizes up for grabs!

Journal #One sports a pale green cover, soft and springy to the touch. Also spring-like is the pink flower through which a bright orange rubber ribbon keeps the book snugly closed until you’re ready to write.

Journal #Two is a shiny, psychedelic blue hardcover artfully covered (by moi) in stickers representing countries all over the world. 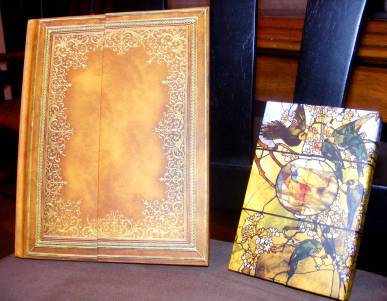 Journal #Three is all class with an exquisitely-bordered hardback leather cover featuring a gentle magnetic clasp.

Journal #Four shares the magnetic clasp feature, meaning your pocket-sized journal will stay safely closed until you’ve gazed to your heart’s content at the bird- and flora-filled cover art suggestive of stained glass.

Journal #Six is softback leather in sophisticated dark brown, perfect for giving your scribbles an air of timeless importance.

Journal #Seven’s hardback cover is a work of still-life art, boasting a stylish assemblage of fruit and calla lilies over a varied pastel background.

Oh, and did I mention that each and every journal will come with a signed “Inspired” bookmark? Because they will. (: 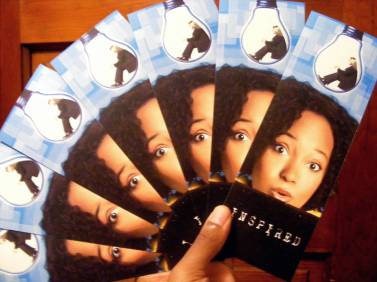 So, how can you enter to win one of these seven superlative prizes? (Okay, maybe “superlative” is taking it a bit far, but come on, after that catalog of notebook pitches, I’m running out of descriptors, here!) All it will take is an answer to any or all of the following inspirational questions”:

What’s the greatest idea you ever had?

For the writers/artists out there, tell me about your muse. What does he look like? Describe her personality. How well (or badly) do the two of you get along?

Who or what do you find simply inspiring?

(And if I notice you spreading the word about the giveaway in social media places, you can bet that will up your name’s occurrence in the raffle pool, too. ;D)

Also, tell me which journal you want. List your first, second, and third choice (or heck, you can rank all seven, if you like). The order in which I draw the seven winning names at raffle’s end will determine who gets first pick. Here’s hoping as many winners as possible get one of their favorites!

You have from now until pretty much just before I announce the winners to enter, and that announcement shall go forth on Monday, October 28th. (Because nothing says “happy [two days early] birthday to me” like presents for y’all.)

And now, one final word from the inspiration behind Giveaway Two…

For a muse like Lucianíel, one story’s end is another’s beginning.

In the wake of his author’s sudden death, Luc takes ownership of her surviving creations—four fantastical characters with tales yet to be told—saving them from unwritten lives crumbling around them and giving them a second chance at a literary future.

Luc finds that chance in the unsuspecting mind of Annabelle Iole Gray, a quirky teen with her head in the clouds, nose in a book, and imagination ripe for a brilliant muse’s inspiration.

Or so he hopes.

Neither Luc nor Annabelle, however, realize all they’ve undertaken. Even with a to-write list including accounts of a shape-shifting cat creature, gentle knight-in-training, vigilante skater girl, and a mystery boy smothering in unspoken fear, the most remarkable saga created between author and muse just may turn out to be one stranger than fiction.