The “One More Day” blog tour marches on! Have you bought yourself a copy of the anthology yet? ^^ How about copies for your friends and family? And you know, I bet your local library would love one, too. ;D

Continuing my series of interviews with each of the authors who contributed a tale to the book, today I joyfully present to you my pal Kimberly Kay, scribe of the anthology’s fifth story, “Sleepless Beauty”.

Hello, Kimberly! Tell us: How did you hear about the “One More Day” anthology contest, and what prompted you to submit?

Kimberly: I subscribe to a weekly newsletter by Duotrope.com. They compile all sorts of information on what publishers actively seek and when the deadlines are. I try to keep an eye out for anything that I can do a fairytale spin off of, and once I realized a sleeping beauty tale fit snugly into a time themed anthology, I wrote up “Sleepless Beauty” and sent it to my critique group (shout out to Ashley, Sarah, and Miranda!) for review. With their aid, I edited it nice and neat. Deciding to actually submit it was the hard part, though. I’m sure I’m not the only writer who second guesses their skills—especially with the submission period being amongst finals when I was fully frazzled. However, on the last night of the contest, I tackled my nerves, and borrowed a computer from my coworker to submit “Sleepless Beauty” just minutes before the deadline closed. I don’t recommend that kind of procrastination.

Is this your first published story? (If not, what was?)

Kimberly: Are we ignoring the embarrassing attempts at poetry published in school anthologies? I’ll assume so. My first published story was called “Pegasus Flight.” The Yahoo group I subscribe to advertised that “Stories for Children Magazine” was hosting a “Wacky Dreams Story Contest”. I wrote up a loose, lighthearted piece about a little girl who had to help a lost Pegasus find its parents. The entry ended up winning third place, and was rewarded with publication. Aaand I got a snazzy iTunes gift card out of it. All in all, not a bad deal!

Which of the characters in your story was your favorite? Who was the easiest to write? What about the hardest?

Kimberly: I’m not sure it’s legal to pick favorite characters. I mean, they all have their strengths and weaknesses. However… *Glances slyly over shoulder* I will have to admit that I found a favorite in Prince Edwin because he is just SO over the top—which, consequently made him the easiest to imagine, and the easiest to write. As for the hardest, I’ll go with Ben. I always get tense when I have to write any sort of love interest, because, you know, the whole story sort of falls flat if you don’t get the part of the dreamy guy done right.

If you’d been in the place of your story’s main character, how do you suppose you would have handled their situation?

Kimberly: You mean what would I have done if I were the servant of Sleeping Beauty and realized she’d just pricked her finger, and we were all doomed to fall into a curse by sunset *GASP* unless Miss Beauty’s true love could be found to wake her and prevent us all becoming living statues for one hundred years? Weeell, like Aesira my first thought would have been to try Miss Beauty’s last love interest. Also like Aesira, I’d steal a horse, but instead of fearing it, I’d relish the moment—as I adore horses, unlike my heroine. Tragically, I likely wouldn’t have had a love interest of my own to keep my temper in check around (Besides being taller than Ben, I think I’d be too much for him to put up with), and would thus have ended up smacking Prince Edwin, and consequently sucking him into the curse with the rest of us, and ruining any sort of chance of a happily ever after. Dang. Good thing I wasn’t in Aesira’s place.

Besides your own, which of the anthology stories is your personal favorite, and why?

Kimberly: Ooo, that’s a tough one. It’s definitely between “A Morrow More” by Ms. Danielle E. Shipley (why does that name sound so familiar?) and “Stage Fright” by Ms. Erika Beebe. “A Morrow More” I loved because the original set up of the world is engaging, and the humor makes me smile every time I think about it! “Stage Fright” has such beautiful, thoughtful character creation that gives me chills. Both humor and deep characters are something I value when I read, so I’ll decisively be indecisive and say both!

If you could read only One More Book before some tragic turn of events prevented your ability to ever read another word, which book would you choose, and why?

Kimberly: Probably “Entwined” by Heather Dixon. For one, it’s my all time favorite fairytale retelling (ironic, because I didn’t even know “The Twelve Dancing Princesses” was a fairytale until after reading this book). This was the story that really got me engaged in other people’s retellings (something I’d neglected to do, entranced as I was with writing my own). In “Entwined” the characters are funny and engaging, with all sorts of interesting twists and turns, not to mention creative characters, engaging love interests, and the most attractive, terrifying villain I’ve ever read. I’d put him on my wall of villainy right next to Loki, of The Avengers. #nerd

If you could listen to only one piece of music for a year (though at least you’re allowed to replay it as many times as you like), which song would you pick?

Kimberly: Wow, and I thought picking a favorite character was hard! While I had only a handful of characters to choose from, I’ve got hundreds of songs in my iTunes library to sift through. *Dwells on it for a ridiculous amount of time.* In the end, I’d probably pick “Something Beautiful” by The Outsiders. It’s a lovely, upbeat song based off the Biblical story of Joshua and Moses, and it explores Joshua’s emotions after finding out he’d succeed Moses in leading a nation, and basically his plea to become part of “something beautiful” rather than fall flat on his face. While being spiritually inspiring and uplifting, this song also reminds me of the main character of one of my latest projects who, after having an unexpected mantel thrust upon him, must learn how to turn the poor situations to his advantage and become part of “something beautiful”. Because of the multiple ways to interpret this song, I never grow tired of it!

You’ve got One More Chance to say anything you like to the good folks reading this interview before its end. What’ll it be?

Kimberly: Wow, that’s a lot of pressure, huh? I think I’ll go with: Eat cookies. They are good for your soul. Especially chocolate chip. 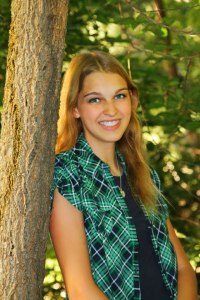 When Kimberly was younger, she was incredibly timid. She didn’t talk much because she was afraid of what others would think of her. Instead, she expressed herself through drawing. Eventually, art alone wasn’t enough. There were some things she couldn’t express with pencils, so she began talking, and when she did, she realized she had something to say. Now no one can get her to shut up! Worse, she’s discovered she can put those words into writing to share what she has to say with even more people.

Kimberly writes short stories and novels—usually fantasy fairytale retellings. Scattered within her works are things she loves: horses, fencing, archery, and so much more. With her friends, she writes fun fan-fiction that expands her creativity, (and shows what a nerd she is).

Through writing, she has found confidence and freedom.

Also on the “One More Day” blog tour:

Don’t forget, we’ve got giveaways going on! This way to the Rafflecopter to enter to win a “One More Day” paperback, e-book, or some sweet swag. And to enter to win my personal raffle for a beautiful clock charm bookmark (as seen below), leave a comment down where comments go for Kimberly (and/or for me)! (And if that comment should happen to mention that you’ve just purchased a copy or two of the “One More Day” anthology, firstly, thank you!, and secondly, extra raffle point for you. ^.^) 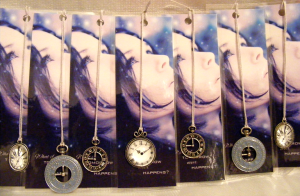 11 thoughts on ““Sleepless Beauty” … or an Interview with its Author, Anyway!”