It’s another twofer day! First up, a blog swap with author Jessica Dall. I’m on her blog talking about when classic tales are your writing inspiration. And she’s over here, talking about “The Copper Witch ”, her NaNoWriMo novel turned newly published novel! The floor is yours, Jessica.

Part One: The Copper Witch: A NaNo Novel

National Novel Writing Month (NaNoWriMo) is a crazy time of year for those who have never experienced it. Writers from all walks of life come together to try to write 50,000 words in one month—which can either crash and burn, or actually leave you with a good start to a novel come the end of November. I was very lucky to find myself in the latter camp with my 2011 project, The Copper Witch.

A diehard pantser (someone who “flies by the seat of their pants” when it comes to writing), I started The Copper Witch with very little idea what my plot might be. A few weeks before I had been playing around on ancestry.com and found a name, Adela, which stuck with me for one reason or another. With thoughts of family lineage, this “Adela”, and November 1st arriving, I decided to start writing to see what came out.

Luckily, not having a plan at all didn’t seem to be a problem. I managed to churn out about 60,000 words in November leaving me about 70 percent of the way through what ended up being the original manuscript. Using the holidays to finish up, I started 2012 with something that actually wasn’t half bad for having been written in two months (sure, there were some scenes that had to be cut due to “NaNo babble” but all in all, the story worked). After a quick few rounds of edits/critiques (the critiques forum on the NaNo site is a great place to connect with critique partners) I was willing to consider shopping the manuscript. 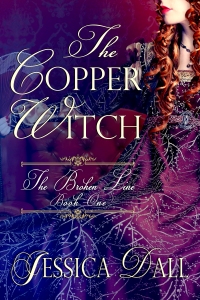 While, from the start, I did have positive responses from publishers, I didn’t find anyone interested in offering a contract (or at least a contract I was interested in—there was a UK press who offered an ebook run with possible print run after I decided to pass on). With new story ideas popping up, and NaNo once again approaching, I set The Copper Witch aside for the time being and went back every once in a while to edit when the mood took me.

Come September 2013, I was introduced to 5 Prince Publishing through its founder, Bernadette Marie. After reading some about them, I remembered The Copper Witch, sitting there patiently on my laptop, and pulled it out to see what they thought. From there, it was only a couple weeks before The Copper Witch was sold along with the rest of the Broken Line series—just in time for Book 2 to be shoved onto the docket for NaNoWriMo 2013.

All things said, NaNoWriMo 2014 will be my seventh year in the program, and with the friends I have made there, and the books I have written, I don’t see any end to that involvement in sight. Especially not when I have the rest of this series to write.

The Copper Witch, available via Amazon, Barnes & Noble, Smashwords, and All Romance.

On Friday, I guest posted on the OriginiqueEquanimity blog about the crazy quirks that make “Inspired”…well, a lot like its author. X)

On Tuesday, Lucianíel took the spotlight (lol, leave it to a light elemental) on The Flight Reflex, blog of my “One More Day” anthology sister Kimberly Kay, guest posting about what he knows best: The work of a muse.

And Wednesday on The Book Diva’s Reads, we looked at book-making from the author side of things with an Annabelle-style 5-step plan to authorship.

Plenty more tour stops still to come (full schedule available on my website’s homepage), and the fantastic book behind it all is still gloriously available for purchase. So if you feel thus inspired, make sure to get your copies!

P.S. – Don’t forget to enter my giveaway for a chance to win awesome free “Inspired” goodies. (:

One thought on “Tour for Two, and Two for Tour”