It’s a Cover Reveal Day for fellow J. Taylor Publishing author Terri Rochenski! Remember last fall when Terri stopped by here with a letter to one of her characters from her novel, “Eye of the Soul”? Well, that novel’s sequel in the works. And just look at how pretty its face is! 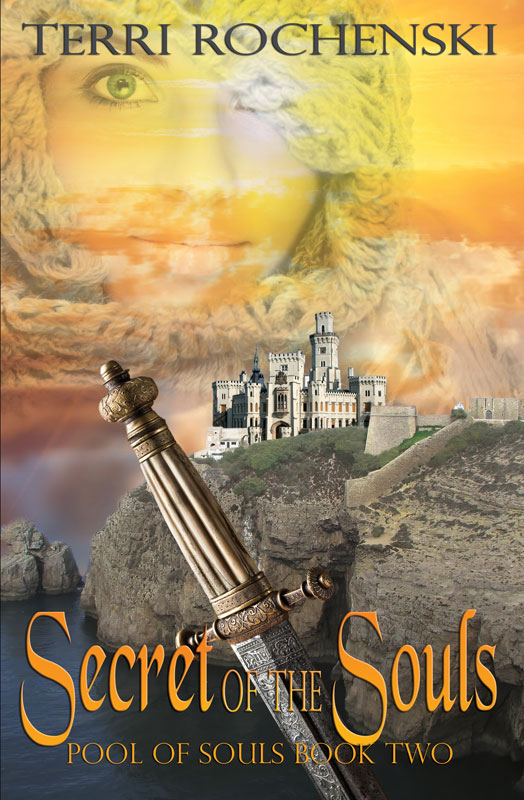 Sword! Castle! Water! Sky! Green eyes! Just throw half of my favorite things all together, why don’t you! Of course, it’s only fitting that the cover be so fantastic. The book is a fantasy, after all.

Meanwhile, on the back of the book…

Thrust out of their homes by a human High Priest on a vengeful mission, the Natives of Derlund no longer have a place to call their own. One escaped capture, however, and now she, Hyla, is the only one who can save her people.

For, Hyla, though, saving her nation isn’t her ultimate goal—returning to the Pool of Souls is. Becoming its Guardian and preserving their faith is her heart’s desire. The perils of her current journey, though, could leave her unable to fulfill that dream.

To find her way back to the Pool, Hyla must live among dangerous, powerful humans willing to defend the Natives, and must submit herself—her Talents—to them. While her protection is paramount, plots to end Hyla’s life will push her to her physical and emotional limits.

On the edge of sanity, her courage tested, and convictions nearly broken, Hyla’s final test of loyalty to her faith comes with the death of one she could have loved.

Whaddaya think, readers? Anybody loving this cover as much as I am? ^^

3 thoughts on “Secret [of the Souls] No Longer”