You may or may not have noticed, but on the night of July 31st, we had ourselves a blue moon!

“A blue moon,” Ionquin repeated. “The second full moon in the same month?” 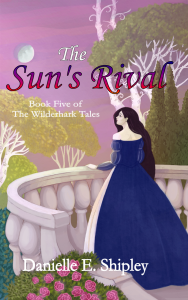 And as I should very much hope my fans will have noticed, the concept of a blue moon played a vital part in Book Five of my Wilderhark Tales novellas. Although, as I observed in that selfsame book’s limited-edition, special prize of a character commentary…

Sadly, not even a Wilderhark blue moon is actually blue. *grumbles about disappointing misnomers*

“Why not?” Ionquin asks. “It’s your story. Your world. You could have made it blue.”

Could have, yes. But how would I justify it? Why should the moon’s light shine blue just because it’s the second full moon in a month? Just for coolness’ sake? That’s not Lumónd’s style. He’s not showy. Nor is he Gant-o’-the-Lute, whom I could totally see as a moon shining blue just because, 1) he could, and 2) blue.

“What about when the moon shines golden or red?” Laraspur asks. “What’s the reasoning behind that?”

Red could be him in a hideous temper over something. As for golden… perhaps he’s particularly pleased.

“So why not have him shine blue when he’s particularly sad?” says Ionquin.

Which just happens to be every time there’s a second full moon in a month?

“Maybe being full twice in a month makes him sad. Maybe he feels fat.”

Laraspur rolls her eyes. “Because goodness knows I shine blue whenever I feel fat. And anyway, the full of the month is when he’s at his most powerful. He’d hardly be at his saddest then.”

“Well then, maybe whenever he decides to don a particularly blue coat. You know the old saying, ‘The clothes make the moon.’”

“That saying is two seconds old and already past its prime.”

“Fine.” Ionquin throws up his hands in surrender. “No literally blue moons, sad but true.”

So glad I’ve got your consent.

All of which raises the question: Why in Wilderhark do they call it a “blue moon”??

In all honesty, until the recent night I went out to see our own world’s blue moon, I never wondered enough to figure it out. (How my brain manages to world-build at all is an utter mystery to me.) But once I did give the matter a few minutes’ concentrated thought – and a little light research led me to this possible reasoning behind our moon’s rare title of “blue” – the answer plunked into my lap like a fallen star.

First, some necessary backstory, as provided in a bit of Wilderhark flash fiction I wrote I-forget-how-long ago (and which almost made it into “The Sky-Child and Other Stories”, but then didn’t, ‘cause reasons). I may one day get around to sharing the full story, but for today’s purpose, all you need is the opening.

Once, not long after the world’s awakening, the Wind of the West asked a boon of the Moon.

“Your Majesty,” she said, with a bow that became a merry somersault ere its end. “The fruit of the steorrow trees in your grove enchant me. Might I have the pleasure of a single seed?”

In mild surprise, the night king of the Sky asked, “And what would a wind do with the seed of a star?”

“Why, plant it, of course,” the wind laughed, “and see what grows!”

The Moon knew the West Wind could mean no harm, for there was not a breath of malice in her essence. And so, as he had steorrow seeds to spare, he granted the gift, to the West Wind’s delight.

She promptly swallowed the diamond-like seed, planting it inside her own self; for so changeable was the form of a wind that it could spawn new life with any living thing. And in hardly any time at all, the West Wind bore her first child: A tree.

The silver sapling grew tall and translucent, like the Moon’s steorrows, and buds appeared all along its spreading branches. But instead of clusters of shining stars, the buds bloomed into flowers as sweet as their mother’s air. And from each blossom sprang a new creature, invisible to all eyes but a wind’s or the Moon’s.

To those few eyes that could see, the creatures were somewhat like in form to a being of Sky, but far smaller – tiny enough to fit in the palm of a hand, and slender as twigs. They flew as a wind flew, eyes shining like starlight, their voices like laughter, or air blowing through chimes.

“What are you, my little ones?” the West Wind asked her litter.

“We are the faer blewn,” they answered, the new name a breath as soft as a summer night breeze.

“And what does that mean?” she asked them.

They looked at one another and answered, “We’re not sure.”

So the wind went to the Moon for his insight on the matter; for, as the keeper of the steorrows and their fruit, he was likely to know better than she.

“They are star sprites,” he told her, upon hearing their name. “Givers of fortune.”

“Our fortune?” the wind asked.

“Heavens, no,” said the Moon. “The fate of the Sky was set the day we rose. These sprites are lesser beings, their influence for beings even lesser than they. Their gift, I think,” he said, glancing downward toward the earth, “is for humanity.”

“How lovely!” said the wind, and blew kisses to all the tiny lives new born. “Then fly, little faery whatsits – do your work. And may the world for it better be!”

There. That Welken word: blewn.

I’m uncertain of the exact translation, but the Moon said it’s to do with fortune. And harken back to Book Five, where quoth a certain character, “I have also heard it said … that a night under the light of a blue moon will restore one afflicted with Moon Madness to their rightful senses.”

A special moon said to cure Lunacy. I’d call that a fortunate thing, wouldn’t you? Enough so that the night Sky’s king might, in his native tongue, name his rare, healing second fullness in a month a “blewn Lumónd”. And somewhere along the line – the same somewhere in which that world’s humans developed the inaccurate habit of calling the heavens “sky” and the great forest “Wilderhark” – “blewn” came to be misspoken as a word more commonly understood by non-Welken speakers: “blue”.

Voila. One secret of the Moon down, while the rest of him remains the same beautiful enigma he’s ever been. ❤