“From the stage that brought you Will & Allyn’s Interactive Theatre,” Allyn-a-Dale proclaims before the curtain, “here’s Ever On Word’s original talk show, Will Scarlet’s Kiss & Tell.”

The curtain rises, the studio audience applauds, and Will Scarlet himself walks smiling and waving onto the bright, cozy set.

“Hullo, everyone! Let’s jump right into it, shall we?” Leading by example, he hops into his armchair. “Allyn, who is our guest character today?”

As the guest enters from the other side of the stage, Allyn says, “Our mutual author describes her thus:

Known by many names and none, a mysterious magic-worker slips seen and unseen throughout the lands and ages, her spellwork leaving a legacy of hearts broken and unified. She’s made her presence felt since the start of the Wilderhark Tales. What part will she play at story’s end?

“Welcome— um, you!” Will greets the woman now seated in the chair across from his own. “So glad you could join me. First things first – for the purposes of this interview, if nothing else, what do I even call you?”

The woman – her appearance neither fair nor foul, old nor young, eyes dark curtains drawn over the windows to the depths of her – looks unblinking at her host. “You may do as those before you have done and think of me simply as ‘the Anarchwitch’. The title was taken knowing it would be thus used.”

“But it’s not a terribly specific title, is it? There have been any number of anarchwitches harassing the Wilderhark world’s royals, over the years.”

She inclines her head in acknowledgment. “We were numerous, for a time. Now the order is long gone, and I the last remaining.” A wistful shake of the head. “You humans come and go so fast.”

Will raises his brows. “Are you not human, then? One of the Welkens, perhaps? Or another of those what-do-you-call-‘ems – what Princess Liliavaine in Book Six of the series labeled ‘more-than-men’?”

“More, certainly. But what I am is not mine to tell. A secret’s keeping is mine. Its handing away,” she says dryly, “our author’s.”

“Heh, I expect that’s generally so. Still, I hope you’ll indulge me in sharing a few details that never made it onto the page. For example, there’s your relationship with Ursula, sometime queen of Denebdeor. You didn’t seem to like her particularly much, and yet you twice—”

“Thrice,” the Anarchwitch calmly cuts across him.

“Three times I gave her aid.”

Will tallies on his fingers. “The baby thing in ‘Stone Kingdom’, the titular Seventh Spell…” He frowns. “You don’t seriously think of the Tipsilvren disaster as helping, do you?”

The woman’s bearing hardens. “It led her to her heart’s other half – and what’s more, returned him to himself. Were it not for me, he would have been under the careless curse of another for the whole of his days, and Denebdeor forever fallen into ruin.” She relaxes a fraction back into her seat. “I cast my first spell neither against Ursula nor for her alone, but for the betterment of many. Thus have my powers been ever used.”

“Not everyone sees it that way. I hear you caught some reader flak for your actions in ‘The Sky-Child’. Something about your curse on Viralei coming across as over-harsh and emotionally manipulative?”

“Over-harsh?” The witch blinks for the first time since arrival. “She was rude. Ursula’s disrespect to me brought her first curse upon her, and no shortage of death with it. Her second lack of manners provoked her kingdom’s century-long petrifaction. Why, then, would I not see fit to punish one whose words to her would-be lover were not only harsh, but cruel? I will not suffer insults from entitled royals, whether the insult be aimed at me, a common man, or a minstrel as far from common as uncommon can be.

“As for emotional manipulation…” She waves a dismissive hand. “’Twas no love spell I cast. I only held her immobile that she might look at the man of music long enough to see whether his inner song called to hers or not. She was free to reject him again once he’d effected her rescue. That she did not is no doing of mine.”

“For someone not in the business of love spells,” Will observes, “you sure have a knack for playing matchmaker. You ever think about scaring up a true love for yourself?”

“It… has crossed my mind.” Her gaze drifts away. “But for all that the stories in which I’ve played a part may seem to argue otherwise, true love is a rather rare thing. Surely you can see why. Think of the string of improbabilities so often required to bring the lovers together. To connect with one’s heart-match alone, unaided by someone with the advantage of an outside perspective, is but one chance in thousands. I came as close to love as I ever will, in this world, and it was not close enough.”

A smile-like shadow flits over the woman’s face. “Winds blow, Scarlet. An example of what is being what is. I am less concerned with ‘is’ or ‘was’ than ‘will be’. You have a final question for me, do you not?”

The corners of Will’s mouth thrust upward into his smile’s return. “Like you’d need any special magic to know that. Tell me, Anarchwitch, what is our author Danielle’s biggest, deepest, darkest, most mortifying and/or hilarious secret?” The smile beams brighter in defiance of its earlier dim. “Or would you rather kiss me?”

“I have told you: A secret’s keeping is mine. You’ll learn no more from any words I speak. As for what a kiss may tell…” Her eyes focus past Will, beyond the camera’s reach. “That knowledge is for him.”

Will turns in surprise. “Allyn??”

The witch rises to her feet, beckoning. “Come forward, child, and hear what I would say.”

In wordless uncertainty, Allyn crosses the stage to stand before her. Just as silent, her hand guiding his chin’s angle higher, she leans in to touch her lips to his, the kiss lasting but a moment, yet lingering outside of time. Before Allyn’s closed eyes flutter open, the Anarchwitch is gone, vanished into the air like a breath released.

“Well?” Will demands, when Allyn stands speechless. “What did her kiss have to say for itself?”

Allyn’s head half-turns Will’s way, the eyes in his lashes’ shadows revealing as little as any witch. “It sounded like, ‘Good luck go with you.’”

“…Huh,” Will says at last. “If that isn’t just about as enigmatic as it gets. What do you think, Allyn? Are you up to giving the word from our sponsor?”

“Of course,” says Allyn, the shake of his head more an attempt to clear it than a refusal of duty. “Today’s Kiss & Tell segment was brought to you by the conclusion of Danielle E. Shipley’s Wilderhark Tales novellas, ‘The Story’s End’ – its launch celebration going on all this week on Facebook: 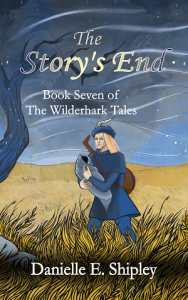 For Gant-o’-the-Lute, “ever after” has been less than happy. With the last of Carillon’s charm over him gone, the minstrel-king puts royalty behind him in pursuit of the music he once knew and the lifelong dream he let slip through his fingers. But dark whispers on the wind warn that time is running out – not only for Lute and the apprentice in his shadow, but the whole of earth and Sky.

“Thank you, Allyn,” Will says. “Thanks to you as well, Anarchwitch, wherever you’ve disappeared to. And thank you, my beautiful audience. Remember, authors – if your characters would like to appear on the show, simply follow the guidelines provided here, and we’ll get them on the schedule. (And seriously? Stop by the ‘Story’s End’ party, if you get the chance. And/or take advantage of the insane price-drop on Books 1 – 6.5 of The Wilderhark Tales on Kindle. 99 cents a pop, man. Take it from a thief – that’s a steal.) ‘Til next time, lovelies: Scarlet out!”