So, my name’s on the cover of another book, coming… any day now, I expect.

Ponahakeola Press had a call for ghostly short stories/poems, I had an old piece lying around that I thought might suit, so I sent it in, and many moons later, I’m told that I’m in and the anthology is about ready to go. 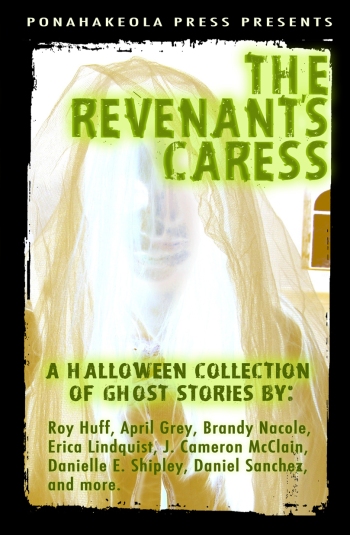 So any o’ y’all who equate “October” with “read spooky stuff”, here’s one for you.

My name is also attached to a Kickstarter campaign.

*(With asterisk-y asides by me.)

The money raised will be used to create and publish a science fiction and fantasy short story anthology. There will be a mixture of stories by invited authors* and stories submitted during an open call. Initially the anthology comprises ten short stories, but with stretch goals and sharing milestones this may be increased to twenty. At least three of the anthology’s stories will be contributions from the open call.

*Invited authors like yours truly. Kai Herbertz asked me if I’d do him the honor of contributing a story, I gave him the timeframe in which that would be remotely feasible, he said he was cool with that, so okay, looks like I’ll be whipping up a Danielle E. Shipley special**, come December.

**(Or, quite possibly, a Danielle E. Shipley/Tirzah Duncan special. We’re in talks on a collab inspired by one of our infamous imaginary romps.)

The Anthology will be released on Amazon via Kindle Direct Publishing and also as a print on demand paperback. Ebooks in Mobi, Epub, and PDF format will be created.

Two language versions will be planned for release. One in German* and the other in American English.

*German? A story of mine in German?? As in, the language with which I am in the process of attempting to make myself bilingual??? What a prospect!

The funding sum is the bare bones minimum to produce the anthology. The more money we raise, the more we can pay authors*.

*I am an author who would dearly like to be paid. Making pennies on my art is like pulling teeth**. Feel free to be generous.

Aaaand that’s the latest. Anybody else out there got word news to share? Drop the headlines in the comments.

2 thoughts on “Word Things That Are Happening and Involve Me”