Less than a month ‘til the launch of Outlaws of Avalon 2, “The Marriage of Allyn-a-Dale” (the Kindle edition of which is totally available for pre-order)! And in looking forward, I can’t help looking back – back to the legendary romance that inspired much of my upcoming novel. Back to perhaps my favorite chapter in a treasured telling of my number one literary outlaw. Back to the first meeting between Howard Pyle’s Robin Hood and the minstrel Allan a Dale.

In homage, I’ve recorded a read-aloud video featuring a snippet from the tale. You can watch it here, on the “Ballad of Allyn-a-Dale” Facebook page. And/or you can join me in gazing at some of these awesome illustrations from my 2016 Barnes & Noble edition of “The Merry Adventures of Robin Hood”. I maybe / maybe not / definitely have this full-pager of a lovelorn Allen bookmarked. 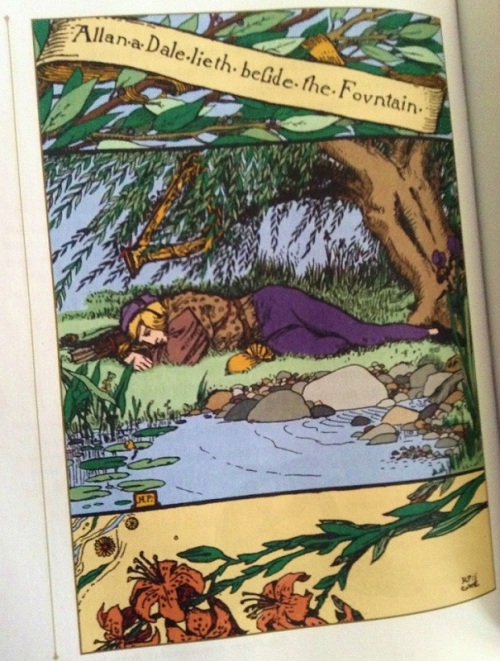 Last but not least, allow me to remind you of the fresh spin on this old classic I’ve got coming at you in just a few short weeks:

There’s more than Fey magic in the air as Avalon Faire prepares for another summer’s performance. This time the show stars Allyn-a-Dale in his role from stories of old: A minstrel with a forbidden romance in need of a little outlaw intervention. Alas, eternal life imitates art as Allyn finds himself slipping heart-first into ill-advised infatuation with an Outsider – the Robin Hood fangirl who’s landed her dream job as the Merry Minstrel’s wife.

As new love blooms, an old love festers, the scarring shadow of Allyn’s dead father threatening to devastate the young minstrel’s hard-won harmony. And elsewhere on the undying isle, the cracks of immortality are beginning to show. Caught between the mysterious meddling of Morganne le Fey and the wild schemes of Will Scarlet, it’s up to Sherwood’s outlaws to navigate past and future, legend and prophecy, treachery and passion, before Avalon is torn apart from the inside out.

See you ‘round the greenwood!