*points to the title* Were you aware there’s a podcast wherein the premise is just that? I was not, because when it comes to podcasts, I am generally unaware.

But Canada-based GRTTWaK came to my attention via that occasionally-useful-albeit-mostly-irritating pillar of social media, Facebook. More specifically, via this post on the Chicago Writers Association page.

An open mic night for diary entries, angsty teenage poetry, short stories, etc.? I have a whole fireproof box FULL of that stuff, and absolutely NOBODY who wants to hear a word of it!

Nobody, that is… until now.

I e-mailed Dan Misener for further info on how to participate, then dug into my archive of journals to pick out the perfect 5-minute excerpt.

…Wow, was it hard to find. I, uh, may have spent most of my youth complaining about family, swooning over the Backstreet Boys, and fetishizing characters in an unrelenting slurry of fanfic. It was retrospectively terrible, and I began to despair.

But then! My saving grace: ~ Song lyrics ~

Before Gant-o’-the-Lute and Allyn-a-Dale, there was… a long list of other characters you may or may not ever meet, and for whatever reasons, they all felt compelled to try their hand at song composition. From the pile, I selected two love songs penned by teenaged boys who liked girls (because what else would a then-teenaged girl who liked boys write?). And with these time-capsule treasures in pocket, I sallied forth to the appointed Top-Secret Underground Location.

(You think I’m joking, but legit – the location was and is secret, and that’s all you’re getting out of me.)

Dan, his wife Jenna, and the sound guy (also named Dan; as a Dan[ielle], I felt right at home) were all delighted and copiously relieved that I’d shown up – because, they explained, it’s kind of hard to do the show when none of the readers show up. Happily, a nice full roster of readers did in fact show up for that night’s event – plus a pretty full house of a crowd – and in due time, the reading commenced.

I ended up being number three in the lineup, all a-jitter, because not only was I going to read a song… I was going to sing one.

Song #1’s melody eluded me, and thus was only recited; but to this day, I’ve found myself from time to time singing Song #2. So hang the fact that my voice is always the first part of me at risk when I’m nervous (or angry, or otherwise flooded with fight-or-flight chemicals). I love singing, and I love attention, and darned if I wasn’t going to combine the twain when given the chance.

Happy news: My performance was well-received! Produced more audience laughter than the ballad’s fictional writer intended (sorry, Michael old boy; sometimes our pain is funny), but also got plenty of applause and compliments during intermission. (My voice did me proud after all. ^_^)

And meanwhile, there were a good dozen other performances – including journal entries, letters to friends at summer camp’s end, 3rd-grader short stories, love songs written by actual teen boys (turns out my efforts weren’t far off the mark!), obituaries for dearly departed grandparents, transcriptions of dreams, and more. Fun times for all – and, as I informed the creators afterward, a good and important opportunity for those of us with a lifetime of words in want of willing ears.

So if podcasts are your thing, totally check out “Grownups Read Things They Wrote As Kids”. No guarantees, but you might just get an earful me crooning to imaginary girls. And if you catch word of the show coming to a stop near you, consider signing up to share your scribbles of yore! Turns out there’s an audience for it after all. 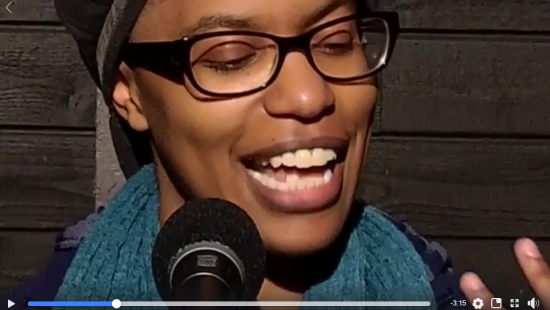