Hello, beautiful people! Will Scarlet, here. And it’s time for another edition of “WHAMO!” (which is basically “WWMHO!” – the acronym for “Will Watches Movies, Has Opinions” – but visually catchier).

BUT FIRST! A word from our sponsor: Today is the last – repeat, LAST – day of the Smashwords Summer/Winter sale, meaning it’s your last chance until gosh-knows-when to get a free – that’s right, FREE – e-copy of “The Ballad of Allyn-a-Dale”, i.e. the first of the Outlaws of Avalon novels co-starring yours truly. If you don’t own it yet, now’s a perfect time to fix that – or to gift it to a friend who needs more Merry Men mischief in their life. Be the truly great hero you want to see in the world, kids.

Now then, onto our feature presentation. Today’s trip back in time to the movies is going to be a bit of a challenge, ‘cause my first and only watch of this film was months ago, and my memory has been shredded half-useless after thirty-some years trapped in Faerie land postmortem. But the viewing was too much fun to ignore for this feature, so we’re going for it! Presenting: 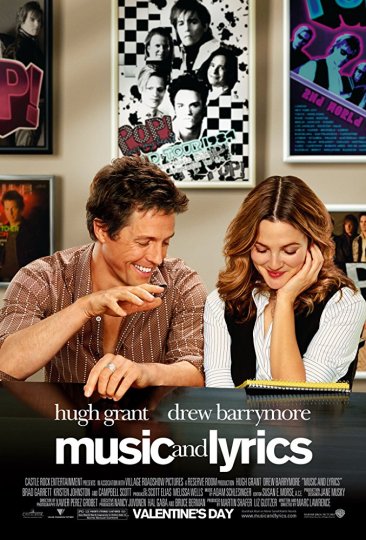 A washed up singer is given a couple days to compose a chart-topping hit for an aspiring teen sensation. Though he’s never written a decent lyric in his life, he sparks with an offbeat younger woman with a flair for words.

Stream of Impressions (the highlights):

“OhmyLord, this opening song number! It is so perfectly, badly, beautifully ‘80s pop parody, and as a child of the ‘80s (…or of the late 12th century, but WHATEVER, I’m a millennial, okay?), I am HERE for this bop.”

“I’m loving this movie’s dialogue. It’s like… understatedly hilarious? Reminds me of British humor. Probably because of Hugh Grant’s accent. …which is probably why he reminds me of Robin Hood, even though not everyone with an English accent is your cousin, Will, gosh! (Yeah, see, Allyn? You don’t have to yell at me. I’m doing it to myself now. I’m on it.)”

“Why is Drew Barrymore wearing modern clothes and makeup instead of being an AU-Renaissance Cinderella? Like, I know every movie can’t be the flawlessness that is ‘Ever After’, but this is weird for me.”

“Hiii, Mr. Schue from ‘Glee’! (Don’t even be surprised I was a Gleek back when the fandom was strong.)”

“Pop Star Girl looks distractingly like Jennifer Lawrence to me. That’s all I’m gonna think every time I see her.”

“…No, okay, I’m also going to wonder what’s up with the rock-hard ‘g’ whenever she says ‘song’. Do people do that? Am I being rude, or do people not actually do that?”

“Check you, Drew, makin’ up rhymes on the spot! Certain minstrels I know would probably hate on your work all day, but I see you.”

“Have I mentioned, in between cracking up, how much I’m enjoying this dialogue?*”

*(If I’d seen this movie more recently than when dirt was new, I’d quote some of this stuff for you. In an English accent, even. Which you’d think I’d do automatically, given that I, too, am English, but I dunno, I’m told America’s corrupted me. Bloody Yanks.)

“HEEEYYY, Danielle, it’s the song! The ‘living with a shadow’ song from the trailer! The trailer you saw back when this movie was coming soon to theaters, and which for some reason you haven’t entirely forgotten, despite not actually thinking about it for, what’s it been? Ten years now? Wow. Can I steal some of your powers of recall?”

“What’s Pop Star J. Law gonna do?! Does she like it?! Does she love it?! Is everyone screwed only one third into the movie?!”

(…And, um, this middle bit is where my memory really starts fuzzing out, so let’s skip ahead toward the end.)

“Welp, you knew the relationship had to go south at right about this point on the story arc.”

“Is she even Buddhist? Just, this concert might seem marginally less culturally appropriative if she were. Or not.”

“—ooAWWWWW, he did lyrics! Drew, baby, turn around!”

“Pop Girl actually did that? What a weird space cadet sweetheart she is!”

“OhmyLord, the closing song sequence! I am being given LIFE with this brand of comedy!”

Okay, so obviously not the most completely memorable movie I ever saw. (What rom-com besides probably “My Big Fat Greek Wedding” is going to earn that distinction?) But one thing I DO remember is how much I enjoyed watching it. For those better than me at retaining dialogue, it strikes me as nicely quotable. I like that it relies more on being quietly silly-clever than in-your-face goofy. (Not that I don’t have space in my heart for the latter as well, which is good, since I’m frequently it. But I can appreciate many forms of humor!) The story, the performances, and the music made me smile. 9/10 for the genre; would watch again.

Where are the POC?

A smattering of Hugh Grant’s mom-fans, the doorman in his building, that one gal who worked for the sister, and Pop Girl’s bodyguard. So, bit parts and crowd scenes. To quote Danielle’s new go-to reaction anytime she observes people underperforming life: “Unimpressive.”

And that’s today’s review! How about you guys? Anybody seen this one? Which romantic comedies and/or non-musicals with original songs are your jam? Sing about it* in the comments!

*(You don’t literally have to go minstrel and make a song out of it. Although if you wanna go for it, I am prepared to support your artistic endeavors!)

2 thoughts on “WHAMO! A Medley of More-or-Less Memories”