Hello, beautiful people! Will Scarlet, here. And it’s time for another edition of “WHAMO!” (which is basically “WWMHO!” – the acronym for “Will Watches Movies, Has Opinions” – but visually catchier).

Today’s pick is a special request from a favorite fan slash friend slash all-around gorgeous individual. Always happy to oblige milady Chelsea de la Cruz, the author and I hit up her place to view an animated classic with “Avalon Faire movie night” written all over it:

“The Sword in the Stone” 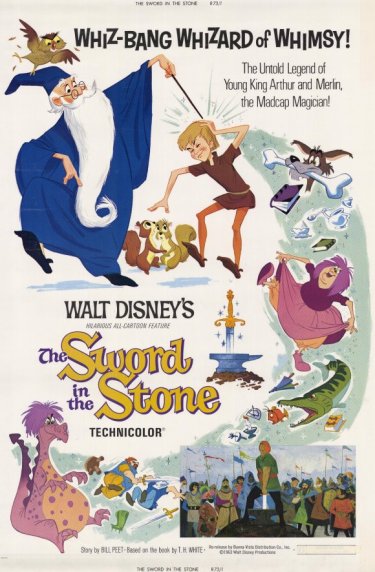 A poor boy named Arthur learns the power of love, kindness, knowledge and bravery with the help of a wizard called Merlin in the path to become one of the most beloved kings in English history.

Stream of Impressions (the highlights):

“A bardic, lute-strumming prologue of an opening! In the words of many a post’s hashtags on my Tumblr: #allyn-a-dale aesthetics #minstrel approved”

“Okay. Oh great. It’s a wizard with his head up his backside’s future. I’m gonna spend half this movie jeering at On Screen!Merlin in place of the Merlin who trapped me on an immortal Faerie island, aren’t I? Sure, that’s healthy.”

“Did they totally base Arthur/Wart’s animation on Mowgli from ‘The Jungle Book’, or is it the other way ‘round? Which one predates the other? Hang on, looking it up… All right, ‘Sword in the Stone’ came first! 1963 vs. ’67. Now we know. ^_^”

“Pretty sure the sugar bowl’s gonna end up being my favorite character in this thing. Watch him get way too little screen time.”

“Word on the street (or from Chelsea’s brother) is that poor, luckless wolf in the forest ranked well on some list of, like, Best Disney Wolves of All Time. I’d probably have cast my vote for the Sheriff of Nottingham, just cuz Robin Hood pride.”

“Yikes, that tower’s fit to topple like Jenga. Zero stars. Would probably not relegate a wizard to it, no matter my trauma-born prejudice.”

“Did my King Arthur never get turned into a fish? Cuz I don’t wanna say that’s why Camelot fell, but…”

“Why is the grumpy owl the only one trying to save little Wart Fish from getting eaten by the moat monster? OF WHAT USE THE MAGICAL WIZARD?”

“My heart is B R E A K I N G for Girl Squirrel, right now! Forget the sugar bowl – she’s fun and flirty and tenacious and brave, how DARE a wizard’s antics toy with her loving soul?! You’re just gonna leave her there, crying in a tree for what she thought was her husband?! I REJECT THIS. Somebody make it canon that Girl Squirrel gets magicked into a human named Guinevere. Animate the sequel. I’ll wait.”

“That… is very obviously not the same voice Arthur had a minute ago. Or a minute later. Like, not even close. Who thought no one would notice??”

“Is Mim short for, like, Morgan/Morgana/Morganne le Fey, or is this just some random antagonist witch?”

“And now for everyone’s favorite ‘battle of the shapeshifters’ trope, the Wizard Duel! You see it in fairy tales (see ‘The Sorcerer’s Boy’), you hear it in song (hear ‘Ceridwen and Taliesin’)… Classic.”

“Oh, hey, look, it’s the sword in the stone. Hands up if you forgot halfway through the fish transformation that this was the title and prologued plot point of this movie.”

“If the fact that Wart can remove the blade doesn’t serve as proof of his rightful kinghood, maybe the sparkly light and heavensong will convince you. It’s at least as good a basis for a system of government as strange women lying in ponds distributing swords, amirite?”

“Well, well, well. Look who’s back from Bermuda, just in time to regain the ear of the new Once and Future King. Sketchy AF. For the love of England, let the owl act as court adviser. Or appoint the sugar bowl. Anyone but Merlin.”

My psychological issues involving archetypal wizards aside, I did find the movie lightly entertaining, albeit ultra-light on an Arthurian plot. Where was all the knightly drama? The peril of the Fey folk? Grand ventures of chivalry? All we really focused on was a kooky mad scientist in a pointy hat. Is that what the T.H. White book the film’s based upon did, or is it just Disney taking whatever liberties it thinks will own the box office of the day? I don’t even know. I have not read the book, and am not an exert.

Arguably, Danielle’s friend / fellow creative Aly Grauer is an expert, at least on Disney. You should totes check out Aly’s watch-through of ‘Sword in the Stone’ on her blog, and all the other installments in her Disney Odyssey series and/or the million other magical things she gets up to.

Where are the POC?

What, you haven’t heard? There were more talking owls and sentient sugar bowls in Medieval England than non-white people. Have a wacky wizard give you an education, why don’t you.

And that’s today’s review! How about you guys? What’s your favorite movie / TV show / book / Wild Western Rock Opera more-or-less based on the King Arthur story? Who are your picks for Best and Worst Wizards of All Time? Discuss in the comments below!

4 thoughts on “WHAMO! Shapeshifting Your Way to the Throne”