Welcome to the beginning of 2019, and to the return of Ever On Word’s regularly scheduled blog posts! My December hiatus was much needed and much enjoyed, but now it’s time to get back into the swing of things as we count down to the release of my nautical fantasy novel, “Deathsong of the Deep”.

As per my usual, the back pages of the book will include a teaser for the next novel on deck – in this case, the blurb and cover of what I’ve been long referring to as #CamelotWIP. But who wants to wait for “Deathsong”s release to begin the Camelot hype, when I can instead reveal both cover and blurb right here and now? Not me! So, if you’re ready to know just what #CamelotWIP’s all about, prithee read on.

Everyone knows the story. Nobody knows the truth.

According to legend – and to Merlin’s prophecies – the great King Arthur Pendragon will someday reign again. But “someday” has been a long time in coming, with decades spent confined in Avalon, the ancient Faerie isle disguised in modern times as an everyday  Renaissance Faire. What remains of Camelot’s court pass their summers by putting on famous faces for the Outside world, all the while questioning who they were before death and magical rebirth robbed them of their memories.

For Camelot to rise again, they must remember the fall.

With nothing but centuries of hearsay to mine for clues, the mysteries remain: Were Queen Guinevere and Sir Lancelot the betrayers, or the betrayed? How came Sir Bedivere to be known as “the One-Handed”, and what hand had he in the kingdom’s undoing? Did the inscrutable Morganne le Fey stand with Arthur, or with his enemies?

And do truly great enemies ever die?

In this epic successor to the Outlaws of Avalon trilogy, the time comes at last for “once” and “future”  to unite, thanks to – (or in spite of) – a king and a wizard, the Round Table and the Fey folk, and one outlaw minstrel whose destiny has only just begun.

HUUUUUUUUUUGE props to the cover’s illustrator, Dariana Loki! Just… how often do a book’s cover and the story vibe inside it match so perfectly? The gravitas of Excalibur… The intriguing quality of the hand that holds it… The duality of the kingdom, straddling time… It’s all there in a thousand words’ equivalence. But so many more thousands of words still wait to be shared, and the necessary delay between the ‘once’ of my writing them and the ‘future’ of their publication is KILLING ME.

Top Reasons I Can’t Wait to Publish This Book:

– You ever have a character make a throwaway comment in “The Ballad of Allyn-a-Dale”, only to realize half-a-decade later that HOLY HEAVENFIRE, that’s actually a mind-blowing piece of #CamelotWIP foreshadowing? Because that’s what happened to this author, and I swear, sometimes I’m convinced my imagination be like: 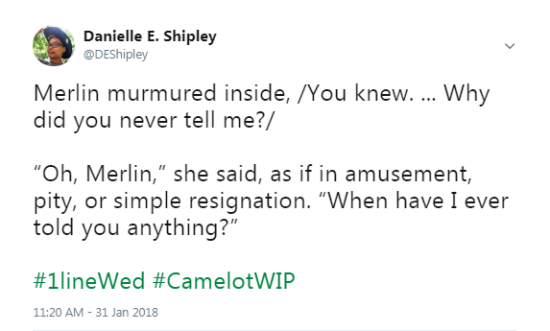 – Most of my books have been written in the closest approximation of silence I could get, but #CamelotWIP has demanded a soundtrack from the first. Not only did I require random “2 hours of relaxing [faux-Medieval and forest-Fey-like] music” videos ‘n’ such replaying on YouTube while drafting…

…but there are a heck ton of songs that never fail to put me in a Camelot mood – predominant among them, the works of Heather Dale, Fall Out Boy, and Imagine Dragons. For the first time, I’ll have a playlist to share! And I am eager.

– I’ll also get to release an Allyn-a-Dale song I haven’t yet been able to share in public because #spoilers. I’ve already got the chords down on my lute, so now it’s just a matter of outlasting the usual waiting games of the publishing biz until I can post a video.

– You may have thought you sorta-kinda met Avalon Faire’s Camelot crowd in my “Outlaws” series. Or you may have more rightly thought you weren’t getting much of a sense of their true selves at all. In any case, the time is soon to come when my readers – and the Camelot crowd itself – will finally come to learn better who they truly are.

To Galahad of Joyous Gard, the Round Table meant three things.

More than merely knighthood, it was the epitome of true manhood. More even than that: It was the height of Christendom.

And Mordred. It also meant Mordred

– The Once and Future Camelot

– *points upward at quote* Y’all. Need. To meet. Mordred. Love him, hate him, I don’t care what you do, but meet him.

– Speaking of important meetings, the novel’s second half will include a small guest appearance by a certain character of mine that it’s past time you’ve been properly introduced to. He’ll get a short story of his own, one day – (not to mention an entire mega-novel by Tirzah Duncan, because we borrow each other’s imaginary people whenever we feel like it) – but this bit part will be his debut.

– Basically, I just want us all to bond in suffering over my take on the saddest story legend ever told. Because I’m unkind.

So, when’s “The Once and Future Camelot” going to launch? I do not know! It will depend very much on how efficiently I’m able to get it properly edited in the time crumbs dropped from my day job. But hey, we’re only like a month away from the release of “Deathsong of the Deep” – (official release date TBD, but it shall be in February) – so let’s hold onto the tentacle-filled positives.

What do y’all think of that Camelot cover, tho?!?!? And the blurb – what catches at your imagination? Which character in Avalon Faire’s Camelot Crowd are you most excited to explore? Scream with me in the comments.