Welcome back to the first-ever coming together of the Stranger-Than-True Book Club – an assortment of Deshipley characters joined in discussion about, in this instance, Danielle’s upcoming high-seas fantasy “Deathsong of the Deep”. I’m your merry moderator, Lady Marion Hood, of Outlaws of Avalon fame. To read Part One of the club meeting, click here. Now, on to Part Two. Laraspur, I believe you wanted in particular to gush about the relationships?

Laraspur (Princess of Denebdeor/Queen of Welken, from The Wilderhark Tales): I did, and I do! I could go on about them for ages, but I’ll try to stay succinct. My first favorite pair, of course, is Molly and Crow. I love watching their estimations of each other develop over the course of time and conversation and adventure.

Uri (skater girl and Fire of God, from the “Inspired” novels): Time, conversation, and adventure – the holy trinity behind half your Wilderhark romances.

Nicky (genderless super ghost-whisperer, from “So Super Dead”): Well, any relationship that doesn’t have conversation behind it can’t hope to go far. The “Deathsong” characters seem pretty good about talking to each other, though. …Excepting maybe Blue Gracie, who’s more the type to only speak when it won’t communicate too much. Y’know how magical, mystical characters be like.

Lar: Speaking of Blue Gracie, I also very much enjoyed her relationship with Crow. Something about the way they wanted to be present together, even if neither one was in a real position to do much for the other. A sweet and a sad sort of caring.

Lucianíel (light elemental, muse, and fictional father figure, from the “Inspired” novels): There was quite a variety of caring to be found aboard the Painted Lady. Crow’s, often cavalier and inexpert. Anafrid’s, austere but dependable…

Lar: Oh, it was nice watching Anafrid care for Blue Gracie! Unlike Crow, Anafrid didn’t even seem to get anything out of it. She was just being kind.

U: Being kind, or flirting?

N: Anafrid didn’t come off the least bit flirty to me.

U: We don’t know how they flirt in Sjorda.

Luc: There’s nothing definitive in text about whether Anafrid is attracted to women, to men, or to no one at all. Subtextually, though, one could make inferences.

Marion: Speaking of Sjorda, what think we of the countries and cultures created specially for “Deathsong”?

Luc: Well, Danielle didn’t spend a great deal of page space delving into any of them. Even so, what little time she devoted to painting pictures of Sjorda’s cold (environmentally and culturally), Chesney’s shallow beauty, and the coarse, homely character of Hornwhal’s Lower Lee did much toward hinting at a convincingly diverse world.

N: Don’t forget the seafaring culture that fascinated Molly so hard. You could peg her for a water girl long before she ever ditched the land.

Lar: Just like Jessica! – Molly and Jessica being another favorite pairing of mine, by the way.

M: I do love me a womance in fiction.

M: Womance. Female equivalent of bromance. Gal pals to the next level – like, I don’t know, you and Gabriel, or… are there any Wilderhark examples, Lar?

Lar: I’d say Father and Millyanna, but one’s a man.

M: Ah, well. In any case, yes, Molly and Jessica were proper mates. Really, it’s a bit remarkable the number of relationships Molly considered equally important to the one between her and Crow. First her and Jessica, then her and little Johnny… 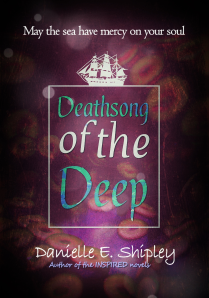 U: It’s like girl protagonists have space to have friends and be mothering and obsess over sea monsters and fall for the male lead. Who knew?

N: My book’s girl protagonist didn’t have space for any of that. I guess afterlife vengeance quests take up a lot of bandwidth.

M: So I’d imagine. Any more favorite relationships, Laraspur, before we move on for good?

Lar: Murdoch and Crow gave me feelings, and, I don’t know, I’m glad Semsen has Anafrid, since she seems to be the only one who halfway sees him.

Luc: I expect that’s because Crow’s shame has stopped him looking.

M: Quick question for each of you: If you had to pick one, would you rather be a seiren, a mershade, or one of the seal folk?

U: If Dis were my goddess? Definitely a seiren. The power of flight and a voice made for vengeance. I’m practically qualified already.

Lar: I’d far rather be a mershade and rescue sailors in need. …Even though it means I’d have to die first.

N: Hey wait, does that mean I’d be like the only regular person who could talk to mershades whenever we want to, not just if I’m about to drown?

U: You’re never regular, but maybe.

N: Cool! In any case, I’d pick being a mershade, too. Superhero ghost mermaids for the win!

Luc: I’ve not been shown enough about the lifestyle of seal men to know how well it would suit me. As for the lifestyle of a death creature like a seiren, it’s all a bit too centered around destruction, for my taste. I suppose that leaves the afterlife of a mershade for me, as well.

M: I expect I would love being part of a seal folk community. And fair warning to the men of land: You try to touch my skin without permission, you get knifed.

Lar: Even in an AU where the land man is Robin Hood and his motives are nobler than his methods?

M: Depending on how well he could explain himself, I might apologize afterward for the stabbing. One more item, now, if we can squeeze it in: The plot. What elements of “Deathsong”s storyline grabbed you?

N: I’m hyped on the way Molly makes things happen. Like, her goals are always perfectly personal – nothing ‘world-saving huge’ about them – but when she wants a thing and a chance of getting it comes within reach, she jumps for it, no matter how crazy that chance looks on paper.

Luc: I appreciate the sharp turn it all takes, halfway through. The drastic change Molly undergoes. The sudden costs Crow has to face. Suddenly, it all goes deeper – again, ‘environmentally and’.

N: And just like that, it’s Kraken time for real!

U: I think it’s interesting how long it takes to figure out what’s up with the Aglatha arc. We hear this thing from one source, that thing from another, a contradiction further up the road, and then by the end it’s like… dang, that’s messed up. As is Crow, the more comes to light. It’s actually terrible, the stuff Danielle just puts her imaginary people through.

Luc: One could argue that it’s no intention of Danielle’s. Some authors… well, they are to their stories as her best minstrels are to their songs: The art isn’t fashioned, only found. And Crow’s backstory, alas, is one easily enough found outside of fiction.

Lar: I just love how everything comes together in the end. I don’t know whether one could call it a fairytale ending, but the deathsong’s closing notes hit me like a proper finale.

M: And on that closing note, thank you, you four, for making this book club discussion a fictional reality. And thank you, readers of the blog, for stowing away for the ride. 😉 Feel free to bring your own addition to the discourse in the comments, and forget ye not: “Deathsong of the Deep” is sailing your way, just one short month from now!