It used to be so easy, surfing that rush of creation.

Just write another novel. It would take her, what, a month?

She doesn’t even know what’s most to blame, anymore.

The burnout, that trauma, the crunch of adult life… what does it matter?

The result’s the same.

Words at the ready, just waiting for something to say.

A spirit inside moves her outsides.

Allyn-a-Dale reaches with her hand.

They were bought for him, the magnets. Sets inspired

by music and Edgar another-Allan Poe.

Words to which the minstrel cannot but viscerally respond –

He plucks a sentence from the store, drawing it together, swift and sure,

as if he were Michelangelo and the phrase

a sculpture waiting in the stone.

But Allyn’s far from done.

for the elements desired, feeling out

Words call as only song and the macabre can:

hole and soul… strange and shroud… dawn and sky pull at his blood.

But there’s a story forming now in which these have no rightful place.

Another time. Another tale. Today, the song is his,

but played for her.

This is how you do it, he tells her

in his fingers’ silent dance.

This is how we breathe.

One word swapped, at a thought, for another.

One sentence shifted down, later lines taking its place.

The sculpture in full emerges from marble.

The artist steps back and shoves author forward

in time to ride the crest of the wave.

There! The rush. The writer’s high.

Only a breath of the air, but sweet as remembered.

Thank you, they tell each other, 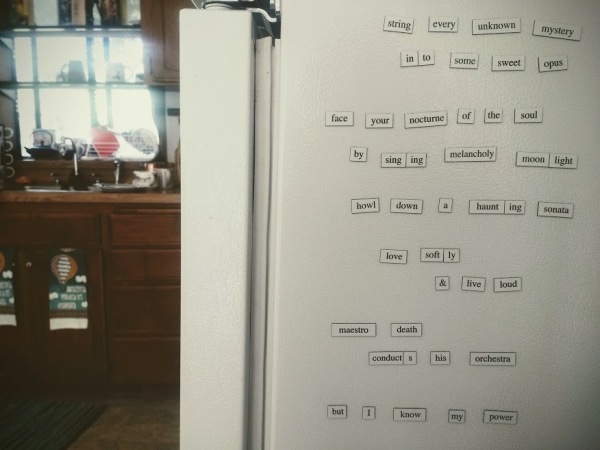 into some sweet opus

face your nocturne of the soul

howl down a haunting sonata

but I know my power