Once upon a short while ago, mah gurl alerted me to a certain contest. 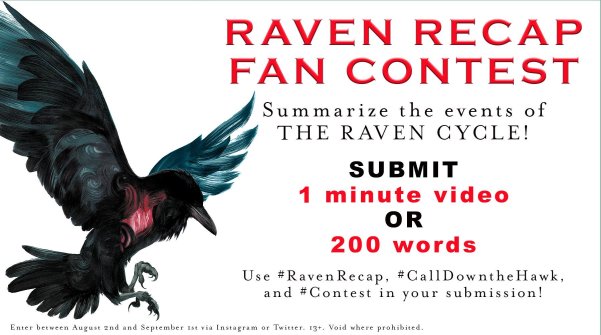 The challenge: To summarize the fantastical events of all four books in The Raven Cycle series by Maggie Stiefvater – (aka, one of my very favorite series in the known universe) – in 200 words or a 1-minute video.

The prize for three lucky winners, chosen by Maggie herself: An exclusive boxed set of The Raven Cycle, plus the contest’s organizers will share the winning entries on their social platforms.

I did not initially think to enter, because condensing the plot of even one novel into a 200-word back-o’-book-esque blurb is struggle enough. (I should know. I’ve only had to do it more than a dozen times for my own books.) How in the world to do it for four???

So I put the notion aside. …And then I got dragged out of bed bright and early by my muse, journaled for about an hour, and wound up with a lovely contender of a poem on my hands, fondly entitled “In Henrietta, Virginia”.

Though I hadn’t the patience to count out the words in my handwritten scribbles*, I could tell at a glance that it totaled past 200. That meant that if I wanted my little labor of love to have a shot in the contest, I’d have to call upon my inner bard and recite the poem at sparkling speed.

*(Having subsequently typed it all out, the exact word-count comes to 271.)

Certainly, I hope to be among the lucky three deemed a cut above the rest by an idolized author! But even if I’m not, it will be something to suppose that she saw art I made in response to hers, and that it gave her joy. After all, were I the author in Maggie’s place, I’d be giddy over a fandom scrambling to put my beloved story into new words.

Non-Stiefvater readers of the blog, meanwhile, are also perfectly welcome to watch my video (linked here!), and/or read the poem at a less break-neck pace below.

A daughter of seers knows two things for truth.

The first she’s been warned of since earliest youth –

To kiss her true love is to kill. Next, her rule:

Avoid the boys from Aglionby school

She knows no temptation until she knows them –

So living, so deathly – a strange constellation:

That yearns and journeys the world over,

Desperate to discover why

He lives this second chance at life.

He knows not the depth of his wealth, nor his power,

Only the call of the legend Glendower

A son of a dream dreams a world of his own,

Full of cages to rage in ‘til he reclaims home.

A boy in the dust sells his hands and his eyes.

Could this bondage help free him from family ties?

A mantle of green seek a waren of grey.

A poet with blood on his hands finds the way,

Along with a love and a life that he craves,

Their searches converse on a line o’ the ley,

The road of the corpses who walk in the day,

But too fast start to fade, become monstrous shades,

Like nightmares that out of thieves’ dreams claw their way

Where you unearth a tomb, expecting one thing,

Only to find the mad light of a tree.

Where hornets are death, unlike robotic bees,

And all could soon fall to the Unmaker’s sting.

Ware the words of the forest, the song of the corvids,

You mirrors, magicians, and dreams:

The way you’ve made is the Raven King’s.

Any other fans of The Raven Cycle (and/or other Stiefvater works) in the da house?! If yes, how well do you think my poem captured the soul of the series? If no, has this post made you at all curious to give the books a read? All thoughts welcome in the comments!

3 thoughts on “In Henrietta, Virginia”