Welcome to my stop on the “Eye of the Soul” blog tour! I reviewed the novel on its release day last month, and now author Terri Rochenski herself is here (or, well, her words are!) with a very special little guest post at my character-loving request: A letter to one of her own.

Can I just tell you what a pleasant surprise you turned out to be? When my muse first introduced us, I put you into a little box, one all neat and tidy by a true planner, someone who doesn’t care for change a whole lot.

As your story unfolded and interwove with Hyla’s, though, you stretched a bit and pecked at that box like a baby chick will its shell until you emerged into a different light and I was able to see you clearly.

The ensuing conflicts and tension that arose intrigued me and I had no choice but to tell your story as you dictated. You became a Gift to many, a blessing in disguise. Who knew the gods had such plans for you? Who knew the depths of your faith and your faithfulness? I can’t wait for our followers to read the final chapters of your story. I hope they’re as happy with your ending as I am.

Thank you for refusing to stay where I thought you belonged, but most of all thank you for allowing me to tell your story. 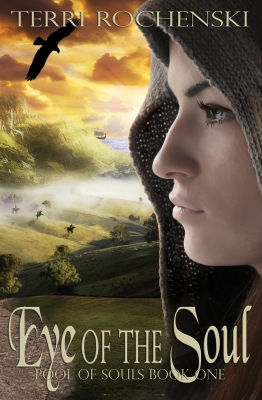 That should be Hyla’s first thought as her people are chained and imprisoned for no imaginable reason.

Instead, Hyla finds herself traveling through a land void of Natives, with human soldiers pillaging in desperate pursuit of her, and in search of the mystical Pool of Souls—home to the one man who can save her people.

Or so she believes.

Led by her faith in the deity Fadir, Hyla is met along her journey by Jadon—a human male and fierce King’s warrior, and his childhood best friend Conlin—one of the few Natives aware of his Fadir-given Talents.

Protected by Jadon, guided by Conlin, and with an unfailing belief in the purpose of her pilgrimage, Hyla carries on.

Like her, though, another searches for the Pool, and should he gain access first, everyone she loves, and everything she knows, could be lost.

Terri started writing stories in the 8th grade, when a little gnome whispered in her brain. Gundi’s Great Adventure never hit the best seller list, but it started a long love affair with the fantasy genre.

Today she enjoys an escape to Middle Earth during the rare ‘me’ moments her two young daughters allow. When not potty training or kissing boo-boos, she can be found on her back patio in the boondocks of New Hampshire, book or pencil in hand.

“Eye of the Soul”, available now!

And don’t forget to try your luck in Terri’s GIVEAWAYS!

Though I revel in the art to be made with you, I fully acknowledge that you are ridiculous.

You contradict your own rules as often as you follow them, as if you’re not even trying to make sense of yourself. Anyone able to read this blog post in the tongue in which I typed it should give themselves a round of applause. I feel I owe myself a treat just for being able to thus convey my ideas. We’re geniuses, all of us! Geniuses with a dum-dum language!

This truth was driven home to me after reading a post by Ruth Layne on her blog, Misadventures of a Would-Be Writer. Hey, y’know what, English? You Should Read This. Entitled “Lots of English. Whole Lots”, it points out what a troublesome means of communication you are – not just for brave souls attempting to master you as a second language, but even for your native speakers. Even I, who have heard you spoken since my days in the womb; have spoken you myself since my mouth could manage the phonemes; I who have gobbled through books filled cover to cover with your words, and who have written books, poems, articles, essays of my own – even I do not pretend to wholly understand you!

Fortunately, one does not have to wholly understand a thing to love it.