Those of you who frequent my Facebook author page or follow me on Twitter have likely gotten an eyeful of the following image already. But for any readers here who’ve yet to have the pleasure, consider this Ever On Word’s cover reveal day for Xchyler Publishing’s upcoming paranormal anthology, “Legends and Lore”! 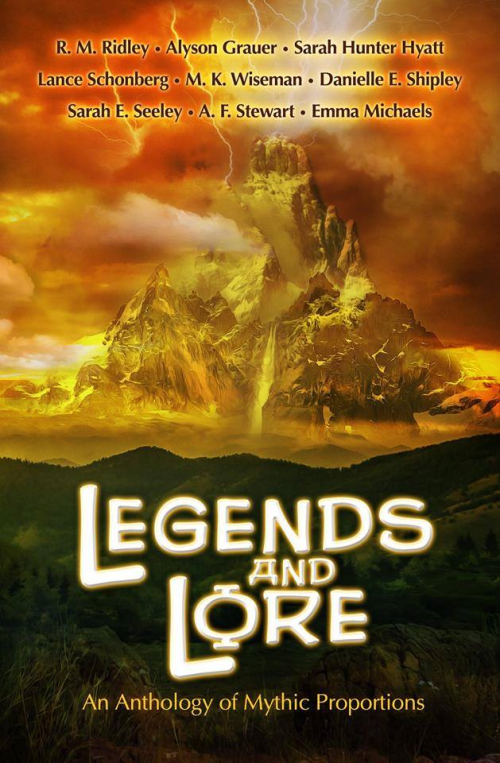 Boy oh boy, I’m itching to get my hands on my own personal paperback of this baby! And I’m so impatient to share my anthology contribution with you guys that – to heck with it – you’re getting a sneak peek at the first 500 words of my story, “Two Spoons”!

This once happened to a friend of mine.

That’s how these urban legends always start, right? You never say you, you say a friend, or a friend of a friend, and you either mean yourself or no one who ever lived outside of a cheesy campfire story. And if you say it happened once, you either mean upon some never-mind-exactly-when time or just plain never.

So, you know if I say a friend and once, I mean something else. I mean us. And twenty years later, it’s still too soon to forget.

It started out perfectly real, stupidly normal. Two kids in high school who felt grown-up enough to do grown-up things, until they recognized the just-beginning-to-grow-inside-of-her thing they’d created between them, and it struck them a little too late just how young and far from ready they were.

She didn’t have much of a family to turn to. He had two or three times a normal family to help make up the difference. When his parents and grandparents, aunts, uncles, and cousins heard there was another one of them on the way, they absorbed the budding mother into their number, and the baby along with her.

That’s what the family always did: feed and grow, feed and grow. They grew a restaurant and fed their community—straight from their hearts to the mouths of their neighbors. Their niche was soul food, and food was the family’s soul.

The new little one, to whom the family gave a proper name only to generally ignore it in favor of calling her Tidbit, practically lived in the restaurant. She sat in a highchair or was passed from arms to arms, lap to lap, while her father scrubbed dishes and her mother scrubbed countertops. With all the kitchen noises around her—banging pots and pans, clattering plates and cutlery, sizzling, whipping, blending, splashing, and orders shouted back and forth—she grew to find less and less reason to add to the chaos.

Past her first birthday, she never screamed or cried. By her second, the family was still unsure whether she’d learned how to talk. By her third, they knew she could, though she didn’t do it often; didn’t open her mouth much at all, except to take in food or drink or her thumb. Having watched the disorganized dance of the kitchen her whole life, she’d figured out walking and staying out from underfoot at about the same time. With her general lack of sound, size, and nuisance, Tidbit was forgotten about as often as she was remembered.

The late spring evening the Black Man came, the girl was four years old and out of the kitchen, watching the less chaotic show of the diners on the floor.

Aaand that’s it for the appetizer, kids. The full meal gets served on October 22nd, release day for “Legends and Lore”. We can help make the wait more bearable by keeping each other company in the comments section. Share your impressions of the cover and/or story snippet? ^^